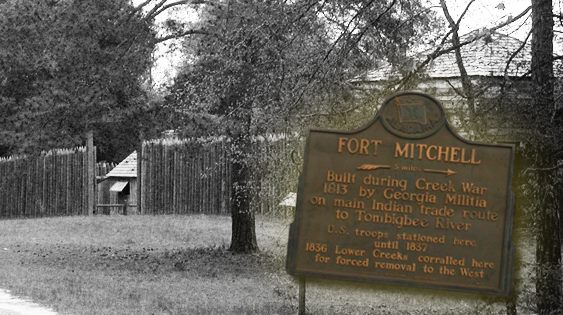 Fort Mitchell was built in 1813 along the banks of the Chattahoochee River, in what is now Russell County, where it played a vital role in the history of a young Nation. It has been said that Russell County is second only to Mobile, Alabama in terms of early historical significance in the State of Alabama.

In the early 1800s, the U.S. signed a treaty with the Creek Nation to use and widen a footpath for a route from Ft. Hawkins, near Macon, Georgia, to Ft. Mims, near Mobile, Alabama. It became known as “The Federal Road”, used by soldiers, the stage coach, and other travelers.

In 1813 the first fort was built following the massacre of Ft. Mims where Indian hostilities were rampant. During the War of 1812, the British were selling guns to the Indians which were used against the Americans. General John Floyd and the Georgia Militia arrived at the Chattahoochee River with 900 troops and 300 friendly Indians to set up a supply base and to keep peace with the
Indians. General Floyd’s troops fought several important battles before the final Battle at Horseshoe Bend under General Jackson. In 1817, the Federal Government set up a Trading Post or Trading Factory at Fort Mitchell to provide food and supplies for the Indians in exchange for furs. The Trading Post was successful until delays in delivery and completion from other traders along the way brought on the closing of the trading post.

Alabama became a state in 1819 and more settlers began moving into the new state. In 1825, the Indian Agency was moved to Fort Mitchell. Colonel John Crowell, Indian agent, was sent to keep peace with the Creek Indians. General Lafayette was greeted at Fort Mitchell by Alabama troops, dignitaries, and the Creek Indians as he was escorted to Montgomery and on to St. Stephens.

The history of Fort Mitchell includes 1865 when General James Cantey trained “Cantey’s Rifles”, who became the 15th Alabama Regiment during the Civil War. Fort Mitchell, a National Historic Landmark Site, brings to life history during the time of the Federal Road, the Creek Indian War, and the pioneer settlement The Crowell-Whitaker Cabin of this area.

I would like to know who Ft. Mitchell was naMed after.

The settlement was named for David Brydie Mitchell, a former governor of Georgia.