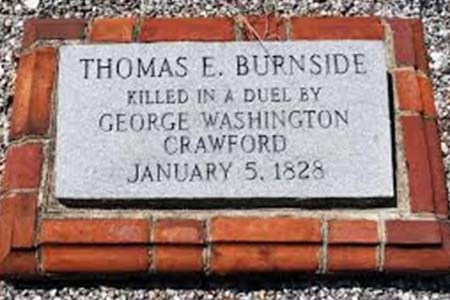 Back in the early days at the fort, early 1800s, quite a few duels took place on these grounds. These episodes were written about in the local Columbus, Ga newspaper. At this time, Columbus was just beginning to grow and events like this were newsworthy. Since Fort Mitchell was near the border between Alabama and Georgia, it was the ideal site for settling disputes between citizens of Georgia and sometimes of Alabama. It was also convenient legally because this territory was still part of the Creek Nation and yet to become part of the State of Alabama and it’s laws.

The earliest notable duel took place between George E. Crawford and Thomas Burnside on Jan. 5th , 1828. Mr. Burnside was the loser of that fight and Crawford later became the governor of Georgia. There is a marker in Fort Mitchell’s little cemetery for Mr. Burnside. Another duel was between Gen. Sowell Woolfolk and Maj. Joseph Camp which resulted in the death of Gen. Woolfolk. This way of “defending a man’s honor” continued for some time but eventually fell out of favor with civilized people. One of the most famous duels took place in New York in 1811. It was between the Secretary of the Treasury, Alexander Hamilton and the Vice President, Aaron Burr. Hamilton died of his wounds the following day. Burr eventually fled and was captured in Washington County, Alabama. It is said that Aaron Burr was brought through Fort Mitchell along the Federal Road on his way back north to face trial for murder. Legend has it that there was a “dueling tree” here at Fort Mitchell where these events took place but the search is on for proof of that.