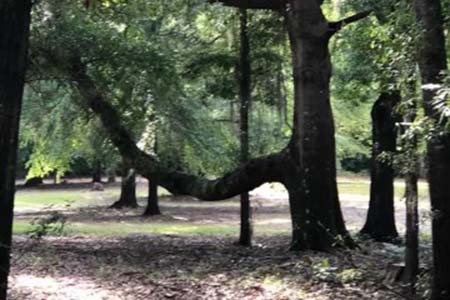 Have you ever heard of a trail-marker tree? These were the trees which were fixed by native Americans to point the
way along a trail. Fort Mitchell is in the center of what once was the Creek Indian Nation. Many trails existed in the area
for hunting, trading, and communicating between villages and towns. It is said that in addition to pointing the way,
these trees were used to point the way to hunting grounds, meeting places, and water supplies. The trees were young
saplings which were bent over and held down by a forked branch from another tree that they stuck deep in the ground.

As the trees continued to grow with new branches, the original part became a limb running parallel to the ground in a
certain direction. Some say trees like this sometimes-had messages in code for Native Americans to locate the graves of loved ones, or to retrieve valuables.

The Old Federal Road was begun in the early 1800s on an old Indian trade route to the west, coming across Georgia
and entering what became Alabama where Fort Mitchell Historic Park is located today continuing to near Montgomery
and south almost to Mobile.

There is a trail-marker tree at Fort Mitchell which is pictured here. Sadly, the very heavy lower limb broke during a
storm a few years ago. It appeared to be pointing the way along what became the Federal Road or the earlier Indian
trail.

The Trail of Tears began here at Fort Mitchell for over 8,000 Creeks in 1837. It’s possible that some of these trees
were started along their journey to help them find their way back to their homeland one day.